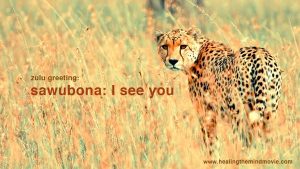 …may as well record it somewhere I may see it again.

When children are asked, “If you could have any super power or special ability, which would you choose?” some might say super strength, or to be able to fly, or to read minds. And some might think that the greatest super power they could ever wish for is invisibility. The ability to move through space and time without being observed, without being held accountable, without being responsible to or for anyone or anything you see when you cannot be seen yourself. But there are times when being invisible is painful and damaging, when it is isolating and demeaning.

“Among the tribes of northern Natal in South Africa, the most common greeting – the equivalent of ‘hello’ in English – is the expression sawu bona. Literally it means ‘I see you.’” – Excerpt from Bennett J Sims quote, PTK 142

Last night, an Academy Award was given to a man who has been accused of sexual harassment and misconduct against multiple women. A woman who is an anti-sexual assault activist and a survivor of sexual assault had to present him with this award. Today, other activists and survivors are saying, “I see you. I see your struggle and your pain, your strength and your courage. I see you when the Academy did not.”

“It means that until you see me I do not exist; when you do see me, you bring me into existence.” – Excerpt from BJ Sims quote

Last week, the president rolled back protections for transgender students that required schools that receive federal funding to allow students to use the restroom that correlates to their gender. To those trans students, Laverne Cox said, “I see you.” To the world she said, “When trans people can’t access public bathrooms we can’t go to school effectively, go to work effectively, access health-care facilities — it’s about us existing in public space. And those who oppose trans people having access to the facilities consistent with how we identify know that all the things they claim don’t actually happen. It’s really about us not existing — about erasing trans people.”

“Ubuntu is the key word used to shorten a phrase in the Zulu language that translates ‘a person is a person because of other people.’” – Excerpt from BJ Sims quote

Last month, an executive order resulted in legal Visa holders being denied entry to the United States, being detained in airports around the country despite their right to enter freely. To those detainees the ACLU said, “We see you. This is not right and we are going to take this to court for you.” And the people said, “We see you,” and donated $24 million to the ACLU to support this action.

I walk through life invisible to my community. To the woman at the bar who says, “You know this is a gay bar, right?” I’m equally invisible to strangers. To the countless new acquaintances who have seen my ring and asked, “And what does your husband do?” And there are times when that invisibility is like a super power. It can protect me from street harassment, or not getting an apartment, or losing a job. It makes women in restrooms smile at me instead of pointedly looking at me, and then at the door, and saying, “This is the WOMEN’S room,” as frequently happens to my partners and friends.

But I reject this super power. I reject this invisibility that the world projects onto me with its stereotypes and narrow-mindedness. I come out and come out and come out, because if I am ever going to be seen, I have to make myself seen. Some folks don’t get that option. They can’t hide the color of their skin, or practice their religion without the outward signs that make them targets. They are seen, but not in the sawu bona way. They are told, “You do not get to exist. We refuse to see you.”

I feel like we are moving backward in many respects in this country. Like so many, I give what I can in the ways I can, I go to the events I can, I make the calls I can. But no one can do it all. And sometimes I have to remind myself that I can’t change things singlehandedly for any entire group of folks who are invisible to this administration. But I can say, “I see you.”