I am surprised not at all to find that, even just three days in, the common theme of “words” has shown itself in 2016. When I met with my FlyLady mentor last night, she asked me if I had picked my word for the year yet. I didn’t know this was A Thing, but I had written here on Friday and “authenticity” had been knocking on my brain-door, so there was that. Then later last night, Jennifer Lawson, aka The Bloggess, referenced #oneword2016.

The first time I chose a word to take with me throughout a year was, I think, in 2009, when I chose the word, “Affirmation.” I imagine that one will pop up sometime this year as well, but as I’ve just now decided that I will do a word a DAY, who knows when that’ll be!

Today’s word came to me as I was writing this. “Leap.” The word itself was in my head because of the realization about Leap Year, of course, but then I thought about my adventure today out on Spring Point Ledge. Now, I realized last year when I started adult ballet, that adults don’t really have much call to bring both feet off the ground at the same time. Unless your gym routine includes box jumps or jumprope or other jumpy type things, we typically have one foot on solid ground most of the time.Taking ballet for the first time in nearly 20 years, I was jumping – leaping – for the first time in likely nearly as long. Sissonne, assemblé, changement, as both feet came off the ground in the 3rd floor studio, I could only think about landing lightly, not about the actual movement I was attempting to execute.

Today was a little different. I was out on a breakwater of granite slabs, in running shoes, mismatched legwarmers, capris, a hoodie, and a wool hat. I left home on a mission, pretending I didn’t remember that the last time I thought about walking out to this lighthouse, in summer no less, I turned back right at the stairs leading down to the first stones. Today, I took the leap. Only barely, and only a few times, and I may have stopped at one point and sent a message to a friend that said, “I don’t intend to die out here today, but in case you don’t hear from me for a while, I’m out on Spring Point Ledge.” But, a few times today, both of my feet were off the ground. As I think about this, I wonder if maybe I’m shifting into a place where I would sooner place my trust in my eyes, my feet, my physical senses in general, than in my emotional senses. Because, while I may not feel this as vehemently, I love this line from High Fidelity:

Rob: “Should I bolt every time I get that feeling in my gut when I meet someone new? Well, I’ve been listening to my gut since I was 14 years old, and frankly speaking, I’ve come to the conclusion that my guts have shit for brains.”

My guts could very easily have had me curled up in the fetal position out on that breakwater today. There was a point where I felt like I was too far from the goal to go on, and too far from the start to turn back. It wasn’t that moving in any direction was terribly difficult, but that it required a bit of a leap. Both feet had to come up. I had to trust that, if I momentarily lost contact with what grounded me, what felt solid and safe to me, I would yet find purchase, and be supported by where I landed.

So, today’s word is “Leap.” I want to remember that I can leap and land safely. Just little leaps – I don’t need to try and traverse grand chasms. But it’s okay to get a little air. To leave the ground entirely, trusting it to meet me again when I’m ready to come back down. 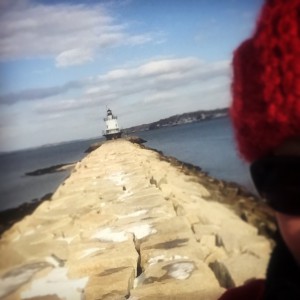