So. I suppose a little back story is necessary here. My Mamau, my maternal grandmother, had a very serious heart attack three weeks ago. She’s been at Central Maine Medical Center since, due to unforeseen misadventures in open heart surgery, and to be honest, it’s scary as hell. Which is why I haven’t written about it – I’m not ready. So instead, let’s talk about a different kind of terror.

I called Joshua from the hospital this afternoon to check in, since I’d stayed the night with Mamau. My call finds him out walking cuz he “just felt like a walk.” Yeah, right – this kid doesn’t leave the house on a weekend without orders or bribery; what’s really up? Pressing the issue yields nothing, so I say, whatevs, he’s alive, I’ll deal with it later.

I get home from 24 hours at the hospital and a business meeting for which I was woefully unprepared (thank you for your understanding – you know who you are). The boy is in that unusually chipper state that is typically reserved for after he’s been busted on something. I’d been thinking about his peculiar behavior since the phone call earlier in the day, and had decided to casually ask for my change from yesterday’s bus ride and grocery trip. This request turns up no receipt and a discrepancy between amount spent and change received. So I give him the “one more chance to tell the truth” bit. He gets uncomfortable and confesses to going to the store to buy a pack of gum, and swears to me that that’s all he bought. Lying and stealing earn him a night of grounding from all electronics. I know there’s more to this, but he’s not talkin’. I’m puzzled, and honestly a bit worried, because I truly thought he’d spent my money on soda, chips, whatever, and didn’t wanna ‘fess up. But if he was willing to tell about the gum….

We go about our night. I make us a kickass steak dinner while he does the dishes without much complaint, because he knows he’s in the doghouse. We talk books and I give him The Lightning Thief to read. I bust in on his naps and tell him he doesn’t get to sleep off his punishment; he has to stay awake until 1am, his usual weekend bedtime. He complains that he’s really, really tired, and I suggest a shower. He tells me he’s already taken one today.

Let’s break this down.

Kid who only takes showers on school days because he knows I’ll make him stop on his way out the door and make him late which means detention if I bust him + Saturday when I wasn’t home and he didn’t have to do a damned thing he didn’t want to = no effing way he showered. But he’s insistent, and I believe him. and, unbeknownst to him, that’s the key to his undoing.

“You showered… because you were getting ready to go out… to buy a pack of gum.”

“I was going… to meet my friends.”

And then my little man takes a deep breath, squares his shoulders and says, “My girlfriend.”

…This is the point at which Kirsten is rendered verbally unconscious.

Things that came of this event:

Joshua and I discussed a lot of important stuff. During which I maybe used the term “heinous bitches.”

I told him I want to meet her, and offered a ride to the mall or something like that. I’m hopeful that she’s a sweet, shy, awkward girl and they’ll just hang out and mostly ignore each other while they play video games on his iPhone. If I smell a rat, bitch better watch herself. (Which I made abundantly clear to J).

We addressed how hard it can be to tell the truth when you don’t know which option is worse (his words) and established a “safe word” for those times when he wants to lie to protect himself. His idea. I was so proud of him for this.

I asked him to think about ground rules for dating, and said I would do the same, and that we’d talk about them tomorrow. This was to buy me time, in case you hadn’t figured that out.

He blushed at least 5 shades of pink to crimson. It was adorable.

I gave him pointers for wooing the ladies. Cuz what the hell kind of dyke sister-mom would I be if I didn’t?

What this all amounts to is —- actually, I don’t know. Right now, Joshua and I are having the most ADHD night ever, and I’ll leave you with this snippet:

“Tomorrow I think we really should try to finish that game [Zelda].”

“We can probably do that; I only have three things to do tomorrow – finish the business proposal that was interrupted by your girlfriend-having-ness, give the dead bird to my friend, and meet my ex-girlfriend’s uncle.”

Yeah, this is how we roll. 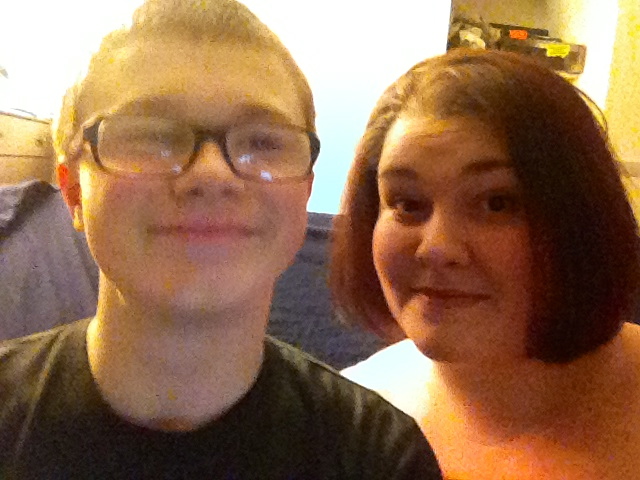