So last May, a coworker and I were in charge of the first department “fun day” we did at work, and we thought it would be fun for everyone to plant something to have at their desk. May flowers, and all that. So I went out and bought a bunch of seed packets and a bag of potting soil and a few lil pots in case people didn’t have them or forgot them. Please bear in mind that I have killed every plantish thing I have ever been responsible for, and so have no idea what I’m doing.

I waited until everyone had finished up, and just spread a bunch of the remaining seeds in my pot. I set it on my desk and pretty much expected to have a stickered terra cotta pot of soil in my cubicle. But then, lil sprouts popped up, and suddenly, I really wanted these seedlets to grow. I moved the pot to the one bit of windowsill we had in our room, and watched my pot fill with beautiful green leafy vines. I had no idea what I was growing since I’d tossed in a motley assortment of whatever seeds were left over, but it didn’t matter. They were thriving, and I was their caretaker.

I’d come in after a weekend, and see them looking rather sad and lifeless. I watered them and spoke encouraging words (very quietly, so as not to seem crazy to my colleagues), and was so excited when, an hour later, they had perked up and were again reaching for the sunlight. By the time we moved offices in late January, it was clearly time for a larger residence, and so I brought my little potted plant home and transplanted it into a bigger container. I was so scared that it would be traumatic and that I chose the wrong potting soil and that I would over- or under-water them and I would ruin this first ever plant I had grown.

And at first, it did seem that way. I kept it in the living room, which is really Joshua’s man-cave and I rarely spend time there. I watered it when I remembered, and felt guilty when I didn’t. Then I about gave up and figured I was better off not trying. Then I realized I was giving up on a living thing unable to do for itself, and that I couldn’t, just couldn’t, not try to nurse it back to health. So I did. I spoke to it as I cleared away dried up leaves, untangled the long strands and spread them out so they could grow in different directions, started turning the pot and moving it to different windowsills to allow for more and varied sunlight.

This morning, I went to water it and move it to a window and noticed a flower on the end of the very longest tendril. A beautiful, tiny little purple and yellow Johnny Jump-Up. This one seedlet had grown to many inches long, had been entangled with its neighbors and I’d extricated it and given it breathing room. There was a short length of it that had withered leaves still. But it had bloomed, nearly one year exactly after it had been planted.

I feel like this is a pretty apt analogy for my own growth. I look at the shoots that grow straight and tall, and that have only healthy, vivid green leaves. Then I look at this one, which may well be the very first sproutlet I saw at my desk. It has surely struggled, and it is not all the way healthy. Its path is meandering and unsure, and sometimes the cat bats it about. But, in the end, this one – not the youthful, tall, straight shoots – is the one that flowered. This one that has endured through a year of seasons, this one that has suffered neglect and still feels the effects of it. This one that persists has blossomed, making the single tiny flower a true little miracle. I am grateful for the little miracles in my own life. The ones that come at the end of a tedious and difficult and circuitous time of growth. I know that there will be more, both for me and for my wee plant. I am proud of us both. 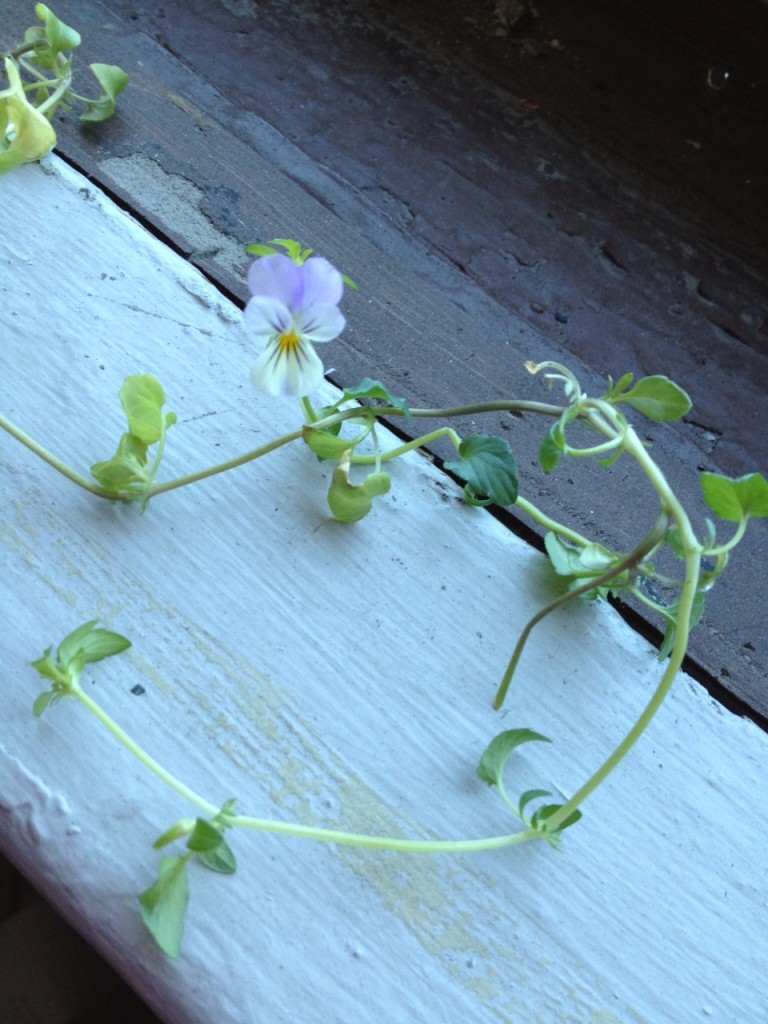